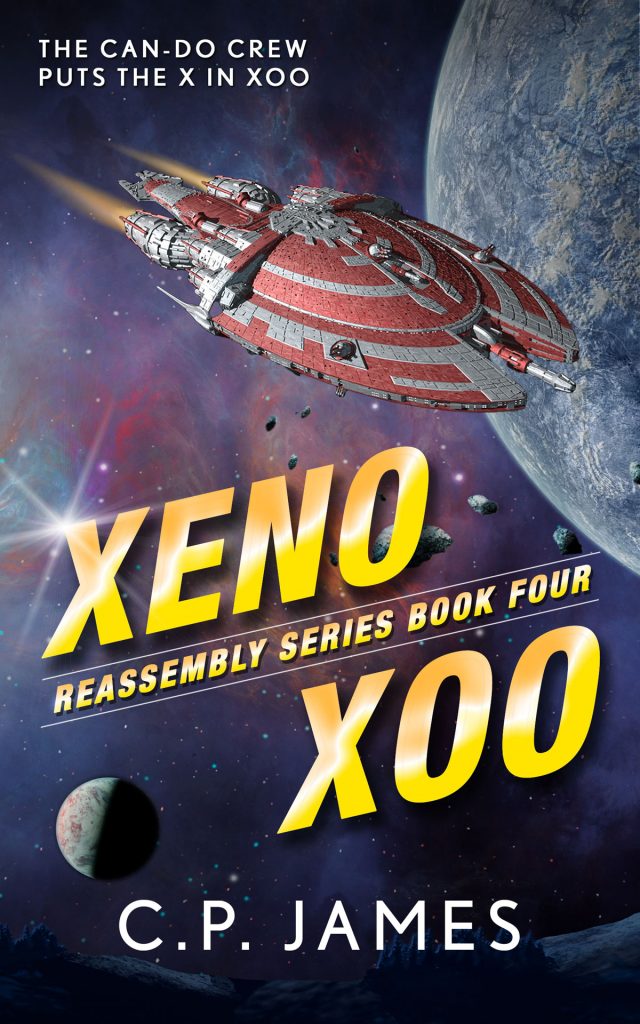 The first draft of book four, Xeno Xoo, was completed July 9. Editing is a slow prospect in the best of circumstances, but with some of the complex action in this one (and my time-consuming part-time job), it’s going to take longer than usual. Realistically, I expect Xeno Xoo to come out around mid September.

My process is still evolving. I start with about a 10K word chapter-by-chapter outline in a spreadsheet. I figure out the major beats (inflection points, essentially), the scenes that connect them, and how to ensure that every chapter advances the story, characters, and plot. Once the outline makes sense and represents the story I had in my head, I pretty much just start writing. I wrote the first chapter April 5.

As I wrote book 4, I felt I needed more connective tissue between those major beats so it wound up being a bit longer than I intended. Long story short, I wasn’t happy with how one of the early sequences turned out. It was 13 chapters long and I intended it for it to be more like five, so I basically lost around two weeks to stuff I’m not going to use AND have to write those chapters new. I may release it to my email list as a deleted sequence at some point, though, so be sure to sign up for my biweekly newsletter.

Silly though it is at times, this is a pretty complex story I’m telling, and I want to do it right. There are a lot of moving parts, and I appreciate your continued patience. I promise I won’t pull a GRRM.

Anyway, you won’t have to wait too much longer for Xeno Xoo. My job is to make sure it’s worth the wait.

So What’s It About?

When last we left Geddy Starheart, he and his old girl Jeledine were gearing up to find Oz and the rest of the crew. So, the first big chunk of this story is dedicated to getting the band back together, starting, of course, with Oz.

They know the Zelnads had a role in what happened over Gundrun, but they can’t prove it yet. They also believe the Nads are seeking deadly creatures to do their bidding, but Verveik can’t jump start the New Alliance without concrete proof of their intentions. As far as most of the galaxy is concerned, the Zelnads are saviors.

The middle chunk concerns the finding of that proof, for which they must enlist the help of Geddy’s old frenemy, Tev Joclen, who is working off his debts aboard the artificial moon Pretensia.

The “Xeno Xoo” is the famous Myadan zoo, where the climactic action sequence takes place. In Rocket Repo, we learned that the derelict Xellaran vessel the Fiz encountered was transporting live ranses (nearly indestructible sand centipedes) from Kigantu to Myadan. That comes back in a pretty big way, and the push to the end is absolutely bonkers. I think you guys will dig it.