Fifteen Screvari Scythe GL-11e fighters appeared on the scopes as though space itself had gathered into a formation of ships. There was no blinding flash of light, no shimmer, no jumpgate. They weren’t there, and then they were. Geddy didn’t know how to fight this way, but he figured he’d better learn. Any other ship would be toast, but the Armstrong, the Alliance gunship Commander Verveik called a Berzerker, had the same Zelnad tech.

It enveloped the ship in a bubble universe, whatever the hell that was, and delivered it instantly to any point in charted space. No jarring quantum compression, no time dilation, no nothing. Blink and you’d miss it. The device itself was little more than a chunky tablet loaded with star charts.

Geddy cracked his knuckles and spoke the command. “Phantoms, deploy.”

The Armstrong’s bag of tricks was deep, and he’d been working his way up to this one. Should he ever find himself in a pinch, three drones about the size of a standard escape pod would deploy from the top and sides to aid in its defense. Even from up close, like his first breathless sight of her back in Verveik’s hidden silo, you couldn’t tell they were tiny ships. Such a clever design. Cooler still was the hologram tech that could make them seem full size.

Even so, it was fifteen against four.

— There are too many.

— I’ll decide when there’s too many, Eli.

— Have you not yet slaked your thirst for blood?

— I know this is a difficult time, but–

— Hold that thought. I need to shoot something.

They were about as far from any civilized worlds as it was possible to get. They’d been monitoring the so-called band of thieves, the untraceable subspace frequency that Jeledine and her sketchy extended network used, for more than two weeks. Any chatter about a salvage trawler and its crew or a gorgeous Temerurian woman would’ve set off literal alarms.

Until they knew who took Oz and why, they had to be very careful. Jel put out feelers about the beam that yanked Oz into the clouds back on Verdithea without really saying what it was. She’d never heard of a gravity beam powerful enough to do that. Her hope was that someone, somewhere, had run across it. That, too, hadn’t yielded any results.

Geddy’s initial panic over Oz and the Fizmo’s disappearance soon rebounded into buoyant optimism. Of course he would find his girl and his crew. But as the days stretched on, that morphed into rage. How long before it dissolved into despair?

Meanwhile, his urgency about the Zelnad threat had continued to build. Verveik and the Committee were supposedly maneuvering to rebuild the Alliance, but it didn’t seem like enough. The sense that the Zelnads were racing unimpeded toward their endgame never left his mind.

The metallic sound of releasing clamps came from the rear of the ship as the phantoms detached. They positioned themselves around the nose, one to each side and one directly above. Even from up close, the size illusion was utterly convincing.

— I still do not think this is healthy.

— Yeah, well, I can only scream into a pillow so much.

Eli, the ancient Sagacean in his head, had grown increasingly concerned about Geddy’s deteriorating mental state. Maybe war games weren’t healthy, but he needed the distraction. Besides, it did serve a clear tactical purpose.

The light around the front screen flashed an urgent red, and the launch alarm blared like a klaxon.

A staccato string of doonk, doonk, doonks came from overhead as mushroom-shaped charges deployed and fanned out in front of the approaching missiles, splitting over and over into a sparkling curtain of chaff. The projectiles burst ineffectually into reddish orange puffs instantly squelched by the vacuum.

“That the best you got, fuckers?” Geddy growled.

These old-ass Screvari ships, relics from a long-decimated army called the Triad, were just the fish in a barrel of anger and spite. Someone took Oz from him, and they would pay dearly. But until that someone was identified, he had only his feeble rage and a simulated Screvari squadron. They’d seen Zelnad fighters once over Temeruria, but they were only escorts. There just wasn’t enough data to guess at their capabilities. Besides, those ships had conventional jump tech, and he suspected there were newer ones.

The drones scattered, drawing fire away from the Armstrong as the fighters unleashed a torrent of red disruptor bolts.

— You know what I’ve always wanted to try?

Geddy tapped a few buttons on the large holoscreen and disabled his shields, a small grin tugging at the corners of his mouth. This ship was just awesome. Disabling the shields on the Fizmo would’ve taken … actually, he didn’t know, because you’d be insane to disable the Fiz’s shields. Anything bigger than a fist would go right through it like an aluminum can.

— Did you just do what I think you did?

— You mean charge ahead without protection? I’ve done that before.

— I’m almost afraid to ask why.

— I want to make sure this is really tukrium.

The big gunship was clad in the galaxy’s toughest metal, which had a reputation for being as immune to disruptor fire as any shield.

He winced and closed one eye as the volley approached. The first bolt struck the ship’s starboard wing, slicing it clean off. Geddy looked out the side in time to see the red-hot end of the neatly severed wing go dark.

His head swiveled back to the screen a millisecond before the main cluster of bolts tore through the bridge, rupturing the delicate barrier between him and the void. Instinctively, he blew the air from his lungs, closed his eyes, and waited for the cold to take him.

The screen switched to Simulation Mode settings. Under the Enemies heading, Disruptor Power was set to 124 percent.

“A hundred twenty-four percent?” Geddy’s face pinched in confusion. “How is that possible?”

The settings screen blinked away, and the ship’s actual scopes took its place. A single ship, Afolosian by the looks of it, was closing in on their position as a bright purple fargate closed behind it. The Armstrong’s database hadn’t been updated since it was created more than eighty years ago, so it didn’t recognize the model, but Geddy did. It was a small merchant vessel with limited armaments. Not a threat by any stretch.

He activated the comm. “Jel, we’ve got company.”

Jeledine, his former partner and booty call, had been working on something in the ship’s small, but well-equipped maintenance bay ever since they left Doxx-Mora. She’d been cagey about what it was.

Metallic footsteps heralded her approach. She felt badly that her extensive network hadn’t come through yet, but she was every bit as anxious for a clue as he was.

The safest way to deliver anything valuable, be it goods or information, was still in-person. Whatever tech was behind the gravity beam that snatched Oz away, in atmosphere no less, suggested Zelnad involvement. Now that the whole galaxy had seen what they were capable of, it seemed almost no one was willing to stick their necks out.

Jel plunked down beside him and squinted up at the ship’s image.

“Friend of yours?” Geddy asked.

She gave a slow shake of her head. “I don’t recognize it.”

A ripple of nerves and adrenaline shot through him. Could this be the lead they’d been hoping for? He hailed the vessel, and the pilot came on screen. As expected, he was Afolosian, a race mostly known for asteroid mining.

His pale green face studied them a few moments before responding. He bore the hardened look of a mercenary or a thief. A ragged scar began at the corner of his small, round mouth and disappeared beneath the collar of his jacket, which made his neck appear preternaturally long.

His dark orange eyes narrowed at Jel. “Are you the in-and-out girl?”

Jel whispered to Geddy, “Y’know, I’ve never been crazy about that handle.” She turned back to the screen and blew air through her pursed lips. “Yeah, that’s me.”

“What sort of ship is that?” the Afolosian’s voice interrupted. “I’ve never seen anything like it.”

“It’s the S.S. None Of Your Business,” Geddy replied gruffly. “Who are you?”

“I see no reason to bring names into this … transaction, do you?”

“Suit yourself,” Jel said. “Whatcha got?”

The pilot’s posture softened, and he sank deeper into his chair. The ship hovered a kilometer away, still in line with the vector it followed here to facilitate a fast escape. Now that the price of novaspheres was solidly into five figures, getting here and back represented a significant investment. He wouldn’t have come unless he thought he had a shot at the reward, which they’d set at half a million credits. Thanks to his old friend Smegmo Eilgars, who had inherited an inconceivable fortune, they didn’t have to worry about money. That’s why he was on the Committee along with Geddy, Verveik and all the others.

“A prominent scientist named Krezek recently disappeared from the University of Braaphis. A student claimed he was pulled into the clouds as you described. The authorities dismissed her account of events. I didn’t.”

Jel exchanged a significant look with Geddy. “How long ago?”

“How’s that supposed to help us?” Geddy asked.

“I happened to be on my way back to Afolos that day. My scopes detected an illegal jumpgate well inside the markers. Based on the gate’s orientation, there’s only one place it could’ve been headed.”

“What about the half million?”

“It’s yours. Assuming we believe you.”

“That might be a problem, because it’s hard to believe,” the Afolosian said.

The pilot paused a moment for dramatic effect. “Stemir.” 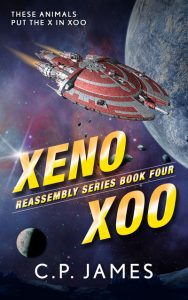