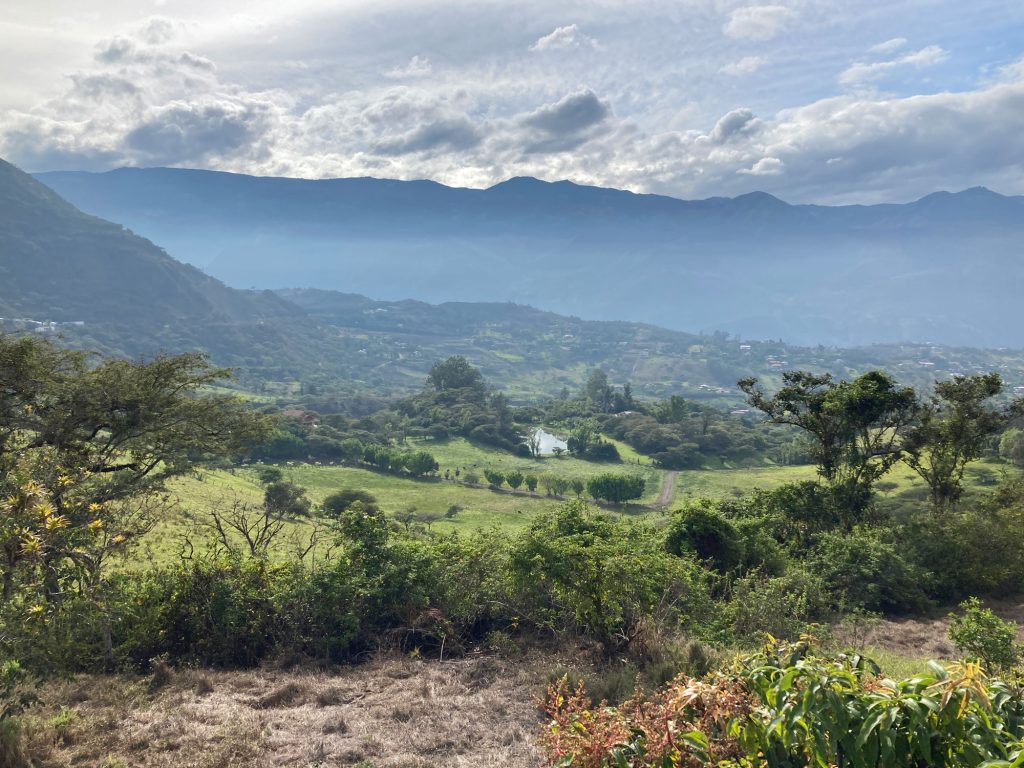 We weren’t in Ecuador very long before we started hearing about something called ayahuasca. You might have heard about it here and there since it’s become a thing that celebrities do. The basic idea is, you go out to the middle of nowhere, most likely Peru but maybe somewhere else, and you experience a ceremony whose purpose is to rid yourself of darkness and trauma that could otherwise only be unearthed through rigorous therapy over the course of months or years.

Having found therapy only marginally helpful over the years, this appealed to both my wife and I. A good friend of mine had participated in a ceremony the summer of 2021 and told us all about it. Under the watchful eye of a shaman, or at least a guy named Wayne who had been trained by a shaman, he drank this plant medicine containing DMT (a.k.a. the spirit molecule) and — long story made very short — claimed to have purged himself of lingering trauma that still colored his life.

That sounded great to both of us, so we anticipated that once we got our legs solidly under us down here, we would seek out an ayahuasca ceremony.

When this past fall rolled around, we got wind of another ceremony with another plant medicine called huachuma, a.k.a. San Pedro. Our understanding was that this was a gentler experience, largely without the purging (read: puking and other emissions) but with comparable psychological benefits. Some call it the “heart opener.” My wife has come to refer to it as “truth serum.”

It turned out there were a few San Pedro ceremonies nearby, including one about an hour and a half south of Cuenca. The cost was reasonable, and we became intrigued. Then our good friends, whom I’ll call Mick and Kara, scheduled a trip to the place in early December. Good, we thought. We’ll see what they say about it first.

A few days after their experience, we ran into Mick at the hardware store. He described his experience as deeply meditative and insightful, an inward and outward journey that focused his attention on matters of import, some of which he didn’t necessarily know going in. But he recommended it highly.

Kara’s experience was darker. She expected something more like Mick’s but had some childhood trauma bubble up that she didn’t have any memory of before. It was hard, she said, but she reckoned with it and came out the other side. Though they signed up for one ceremony, she wished she’d stayed to do another.

With that in mind, we booked our own trip a few days later. We would arrive Wednesday night, participate in the Thursday ceremony, do absolutely nothing on Friday, and do a second ceremony Saturday, leaving Sunday.

An English-speaking taxista, or taxi driver, named Javier picked us up Wednesday afternoon and drove us the 1.5 hours south to the Yunguilla Valley, a spectacular rural area with exceptional crops and springlike temps year-round. A couple miles up the mountain on a narrow dirt road was the home of our hosts, Steve and Sammy.

Steve was a certified counselor in the U.S. for 25 years. San Pedro changed his life, and after learning the ancient practice of the ceremony from a tribe in Peru, he set up his own retreat in Ecuador and has been running it for about 13 years. After treating mental health issues for so long, particularly addiction and trauma, he was convinced that San Pedro had a unique ability to open the heart to lasting change. Sammy was his partner of five years.

The moment we stepped out of the taxi, Steve and Sammy were there to greet us with hugs. After dropping off our stuff in the guest bedroom, we got the dime tour.

The property sits on two hectares (five acres) on a hillside overlooking the breathtaking Yunguilla valley. It’s a postcard that my iPhone SE can’t begin to capture, but I tried anyway. Other than the town of Yunguilla, which is barely a town at all, it’s a bit of farmland and campo (countryside) as far as you can see.

Their house is an 80-year-old three-bedroom with a loft area and a number of outbuildings. The yard was neatly cut grass (vanishingly rare in Ecuador) and dripping with native flora. A creek nearby gurgled audibly, though I later learned it had cut itself a narrow canyon so deep and inaccessible that no one had ever actually seen it. Birds flitted happily about in the towering eucalyptus trees.

Steve led us to a building he referred to as the maloca, but it was basically a gazebo with crystals, organite, and copper wiring running throughout. Its construction is meant to gather and focus spiritual energy, which I suppose makes it like Dana’s apartment building (55 Central Park West for you trivia nerds) in Ghostbusters. This, he said, was where the ceremony would take place the following morning.

Next, we got squared away in our guest room. The accommodations were, to put it charitably, unfussy. But we didn’t come expecting a five-star experience, which is a wise approach to Ecuador in general, and we weren’t there to relax and enjoy ourselves. We were there to do work.

The evening closed with a long get-acquainted conversation with Steve, Sammy, and a friend of theirs named Denny who was just crashing there a while. As you might expect, our hosts were well-versed in spiritual matters and all-in on San Pedro, which they unfailingly refer to as medicine.

The bulk of the conversation centered around the day to come. The ceremony would begin at ten sharp. Before then, we were welcome to drink water, tea, or coffee but couldn’t eat more than half a banana. The medicine was best taken on an empty stomach, they said. After the ceremony began, we would claim our own space somewhere on the property and wait for the medicine to kick in, about an hour later. Then, we were to simply focus on our intention and ask San Pedro to guide us toward it. Steve and Sammy would be checking on us often throughout the day, and around 2 p.m. we would eat some fruit. This would spur on another wave of being deep “in the medicine” and they would collect us another 4–5 hours later.

Steve described the process of preparing the San Pedro juice. The arm-width cactus grows straight up and looks like a star in cross-section. It grows all over his property and the surrounding area. To harvest it, he removes the tough outer skin, then sort of filets off the dark green outside parts, leaving the inner white pith. All that goes into a pot of boiling water for a few hours. Then it’s blended and strained. He described the taste as “not great” and “kind of bitter.”

Since you’re probably wondering, the “active ingredient” in San Pedro is mescaline, which is also in peyote. It’s basically the world’s first and oldest psychedelic, and it dates back to antiquity. I’d never really done any psychedelics before, so I was a bit nervous about the effects, but Steve, Sammy, and Denny all assured us that it was gentle, albeit with the broad caveat that “everyone’s experience is different.”

Sammy prepared a lovely vegetarian pasta for dinner, and we went to bed with our intentions firmly in mind, anticipating what inner adventures the next day would bring.

Archives
Copyright C.P. James 2023 - All Rights Reserved
Back To Top
By continuing to browse my website or clicking OK, you agree to the storing of cookies on your device that help me connect with more readers like you.OKPrivacy policy