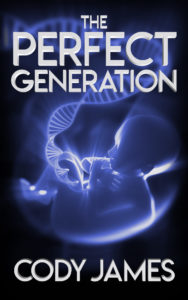 To this point, how writing has worked for me is that I get an idea stuck in my head. Like songs, they’re sticky. Many times, they start very insistently and eventually ebb away, apparently to find someone else’s brain to inhabit. But sometimes they don’t go away, and the only way to get them out of my head is onto the page. So it was with The Perfect Generation, technically my second book but the first that will sneak out into the world.

Unfortunately, I started writing TPG after I succumbed to the idea that I could turn a phrase pretty well, but before any concrete ideas of structure and beats had resolved themselves. I knew who my main character was, roughly, and what he did, and the consequences of that, but only in very vague terms. I just wanted to get going and get it out of my head, with no vision at all for how (or if) it would see the light of day.

The draft that I’ll finally publish is the SEVENTH full draft. I’d finish it, put it away for a few weeks, read it, and realize some major plot point was missing, or some character’s motivations made no sense. Like a leaking faucet, I’d set it down, take it apart, think I had the magic juice, and do another rewrite. All this was done in fits and starts over the course of a few years. Author Chris Fox uses the phrase, “minimum viable product,” and this is better than that. Is it going to change the face of self-publishing? Probably not. But it’s a pretty good read and I’m proud of it. I’m also happy as hell to have it ready to go so I can move on.

Step one will be Amazon Scout, sort of a running contest to identify books that Amazon will select for publication through Kindle Press. Based on what I’m seeing there so far, my chances are fair. Depending on how that goes, I’ll be putting out a character-based prequel novella, Prodigal Sons, free to anyone who signs up for my email list. While all that is happening, I’ll continue work on my passion project, The Golf Course at the End of the World. Lots of other stuff in the ol’ brain hopper, and I’m looking forward to outlining and writing all of it.