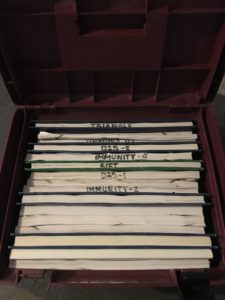 The big box o’ screenplays that will never be movies

I’ve written a lot of stuff. I’ve been a pantser (seat of my pants, vs. a plotter) to this point, though, so most of it is junk. This is where I’m at:

It’s very unlikely I’ll resurrect any of the screenplays. They were experiments built on delusional ideas about the spec screenplay market, and they’re hard enough to write even if you’re really good at story structure, which I frankly haven’t been to this point.

One still has potential. It’s a sort of literary twist on the zombie genre, and I haven’t seen anything else like it to this point. But I do think it has legs, even for people who aren’t into the zombie thing.

The next several months, however, will be structured around my recently completed work, The Perfect Generation, which owes a small debt to Immunity, the screenplay you see a few times here. Some of the back catalog might trickle out here and there, so stay tuned.

Share This
Archives
Copyright C.P. James 2021 - All Rights Reserved
Back To Top